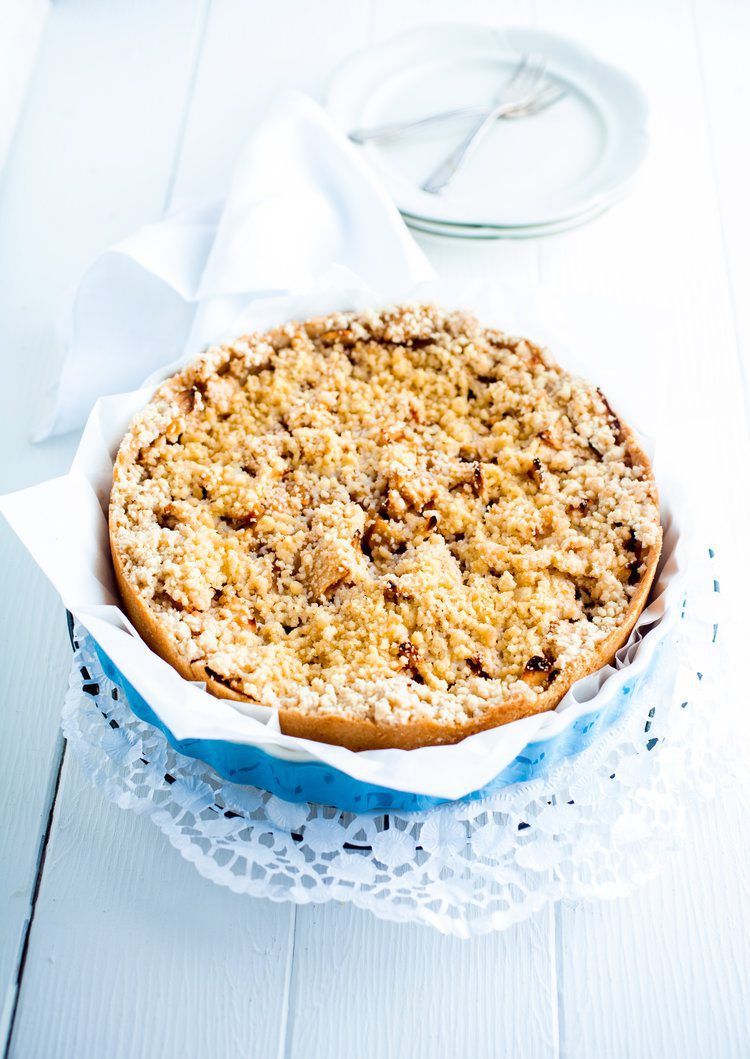 Standing at the farmer’s market last Saturday, I found myself caught between two stalls. The first held six-dollar bags of yellow or white peaches. The second held a bin full of paper wrapped, fried hand pies. I admit, I was hungry and those pies are really inviting – especially when the guy next to you forks over a couple of bills, peels down the paper and takes that first crunchy, flaky bite. Stare, stare…. Drool, drool.

And then I remembered about this new product I wanted to experiment with. It’s Wewalka, European-style fresh bakery dough. I had previously tried the pizza crust, and loved the simplicity of rolling out pizza dough that was already on parchment paper. You simply lift the dough onto a baking sheet and build your pizza.

With fresh bakery dough stored in my fridge, I opted for the bag of fresh peaches and made my way home. Later that evening, my pal, Jenny (the one who cans her own marmalade) decided to make fried peach hand pies. Talk about a perfect compromise!

From family to family, here in the South, there is debate about how to make a traditional hand pie. There is agreement that the original pies were made with dried fruits, reconstituted to avoid a leaky, wet filling. Today, when fresh is best, the wet filling problem is solved by adding a generous amount of thickener to freshen the fruit and control the filling to dough ratio. Hand pies are primarily deep fried in a fryer or large pot of boiling oil on the stove, but they can also be fried in a cast iron skillet and even baked! The dough is usually lighter than pie dough… more like a rolled biscuit dough because it holds up better in the fryer.

Jenny and I absorbed all the hand pie info we could find, and decided to modify a peach pie recipe for the filling using our prepared puff pastry dough. Well, I’m telling you, the results were well worth the investigation! Our hand pies were puffy, golden, crisp and a perfect ratio of crust to fruit filling.

My pies looked like a puffy, jelly doughnut and smelled like hot beignets. But they tasted and satisfied like a pie. We topped them with confectioners’ sugar and cinnamon, and served them with vanilla ice cream.

Fried hand pies are a Southern favorite. Using prepared dough helps jump start the process, making this dish as easy as … well, as easy as pie!

5 to 6 ripe, fresh peaches, peeled and diced, about 5 cups

Juice of ½ small lemon, about 1 tablespoon

Place the diced peaches into a bowl. Add the sugar, cinnamon, lemon juice and flour. Stir and let sit while you prepare the dough.

Cut 4-inch rounds from the pastry dough. Cut as many as you can, about 8 per sheet.

Heat vegetable oil to 375°. If you are using a large pot, pour the oil ⅓ way up the side of the pot, and use a candy thermometer to gauge the temperature. Remember the oil will bubble up the sides of the pot when you add the pies.

Place one round of pastry dough onto your work surface. Use a slotted spoon to place 1 to 2 spoonfuls of peach filling into the center of the dough. Leave a border around the edge. (You want the peaches, not much of the liquid.) Take another round of dough, and place it on the top of the filling. Use a fork to crimp the edges together. Repeat with the remaining rounds.

Gently place the pies into the hot oi. Cook until golden on one side. Use a slotted spoon or wire basket to carefully flip the pies to cook until golden on the second side. This whole process will only take a couple of minutes. Transfer the pies to a baking sheet lined with paper towels. Sprinkle with confectioners’ sugar and a bit more cinnamon.

You are going to have extra scraps of dough, and perhaps some extra peaches left over. Tear the dough into scraps and fry them up! Sprinkle with sugar and set them in a bowl. I guarantee you, they will be gone before you turn around…. But if not, store them in an airtight container. They will stay crisp for several days!

Same goes for extra peaches. Place them into a pot and add maple syrup. Heat the peaches in the syrup until bubbling, about 5 minutes. Pour the hot maple/peach syrup over pancakes, waffles or French toast.