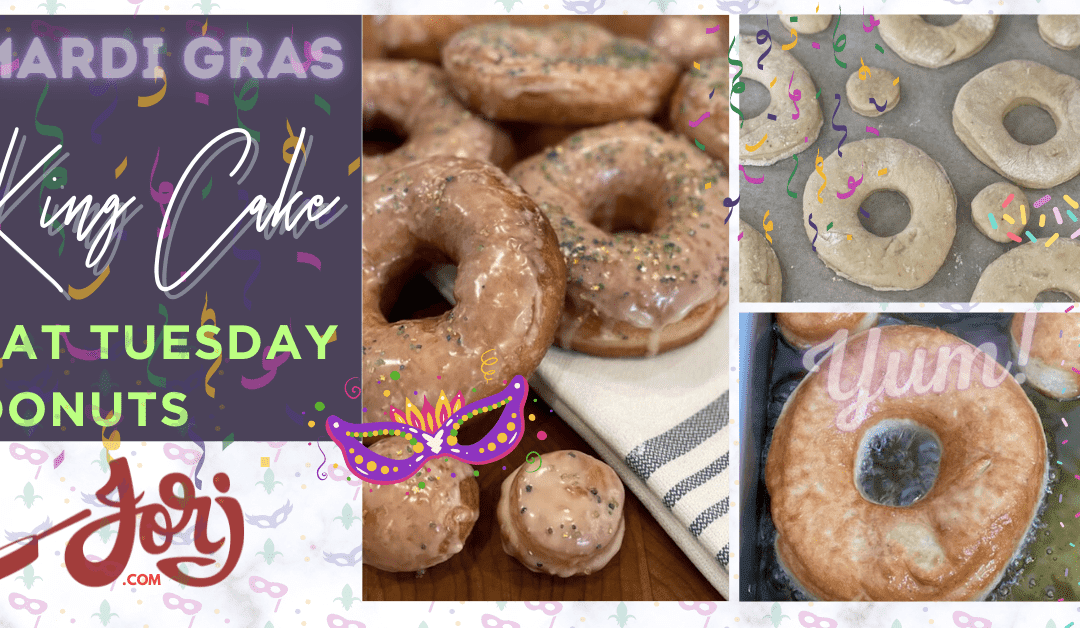 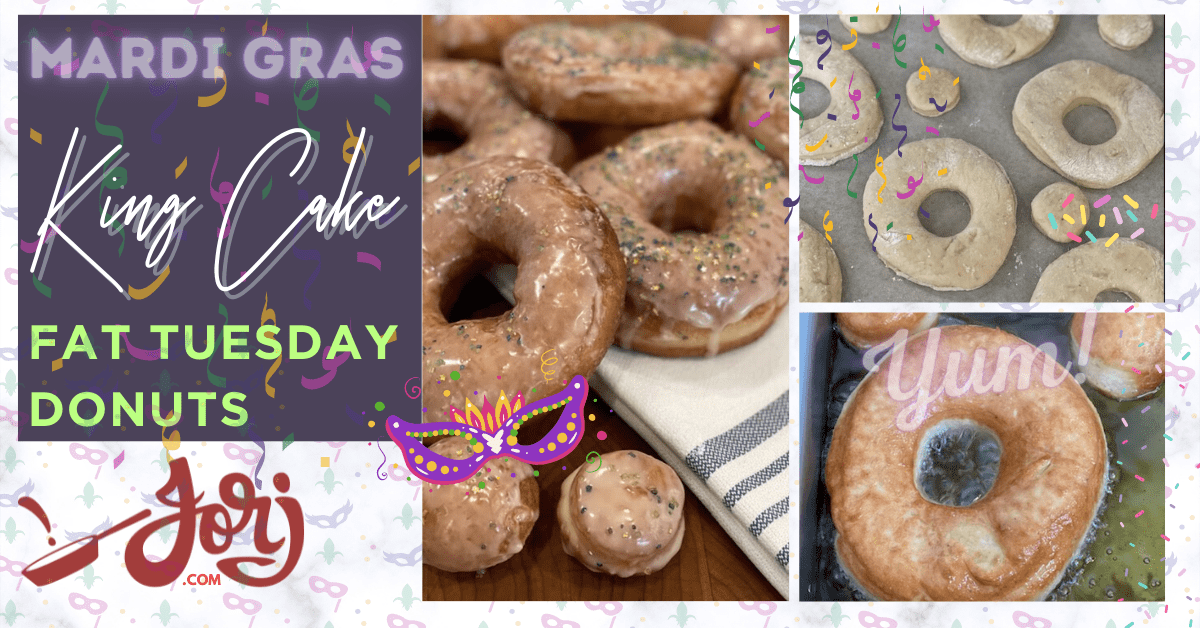 Need a Mardi Gras party food idea? Make Fat Tuesday delicious with this twist on traditional King Cake, from Jorj’s kitchen to yours!

This date marks the official beginning of Mardi Gras which last until the first day of Lent. Most of us don’t celebrate the entire season, after all, there are other holidays in-between!

So many Mardi Gras celebrations are left for the two weeks before Ash Wednesday.

My Mardi Gras memories settle themselves in my Grammy’s kitchen on the Tuesday before Ash Wednesday, known as Fat Tuesday.

My sweet, itty bitty Polish grandmother would create the most delicious pillowy donuts that day. Hot from the frying oil they were doused in powdered sugar and lasted just moments before we popped them into our mouth.

Traditional Polish donuts known as packzki are rich and filled with cream or fruit. My Gram filled hers with grape jelly. But she saved the unfilled donuts for us to gobble up. 😋

I’ve made jelly-filled donuts before.

I’ve even made pumpkin spice donuts with maple glaze. 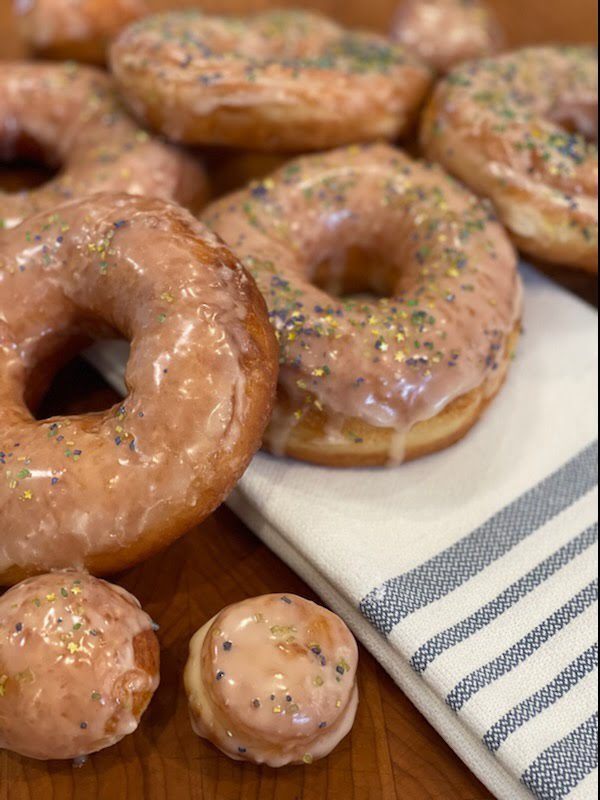 This year, I’ve decided to make King Cake donuts to celebrate the season.

These are big, fluffy, light-as-air donuts doused in a sugar glaze and sprinkled with traditional colors of the season, purple, yellow, green, and gold sprinkles.

Tried it? Tag it!

I would love to see what you did with this recipe.  Share your creation by tagging #inthekitchenwithjorj and with Scrumptious Possibilities With Jorj, my free private home cooking group.

Makes about 9 large donuts plus holes

Place the flour, granulated sugar, yeast, salt, and nutmeg into the bowl of an electric mixer fitted with a paddle attachment. Whisk the milk, butter, egg, and vanilla together in a bowl. Pour the wet ingredients into the dry ingredients and mix until the dough just comes together. Stop the mixer, cover the bowl with a clean towel, and rest for 5 minutes. Change the paddle attachment to a dough hook and beat until the dough begins to pull away from the bowl, about 6 to 8 minutes.

Dump the dough into a bowl sprayed with vegetable oil spray. Turn the dough to coat on all sides. Cover the bowl with a clean towel and let rise in a warm place until doubled in size, about 1 to 1 ½ hours. The dough is doubled in size when you stick your finger into the dough and the indentation stays.

Roll out the dough and use a donut cutter (or round biscuit cutters) to cut out the doughnuts and holes. Place these onto baking sheets lined with parchment paper. Place into the warm place and let rise until doubled in size again, about another 30 minutes.
Heat oil to 350° in a deep pot or Dutch oven. Only let the oil fill the pot one third up the sides so that when it bubbles up it won’t overflow.

Whisk together the sifted confectioner’s sugar, vanilla and cream. Dip one side of the donuts into the glaze. Return to the rack and douse with sprinkles. 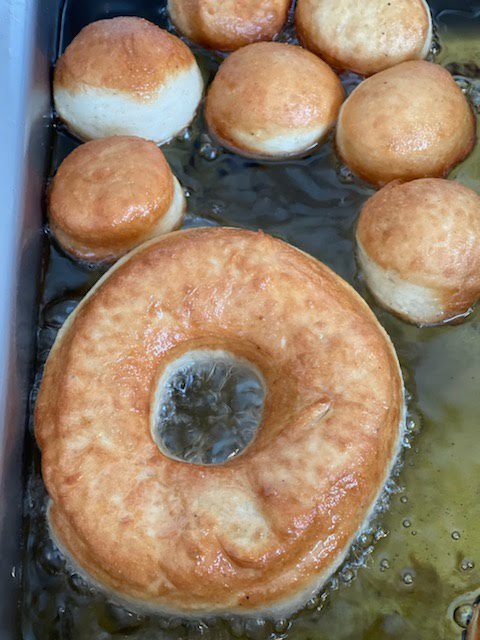 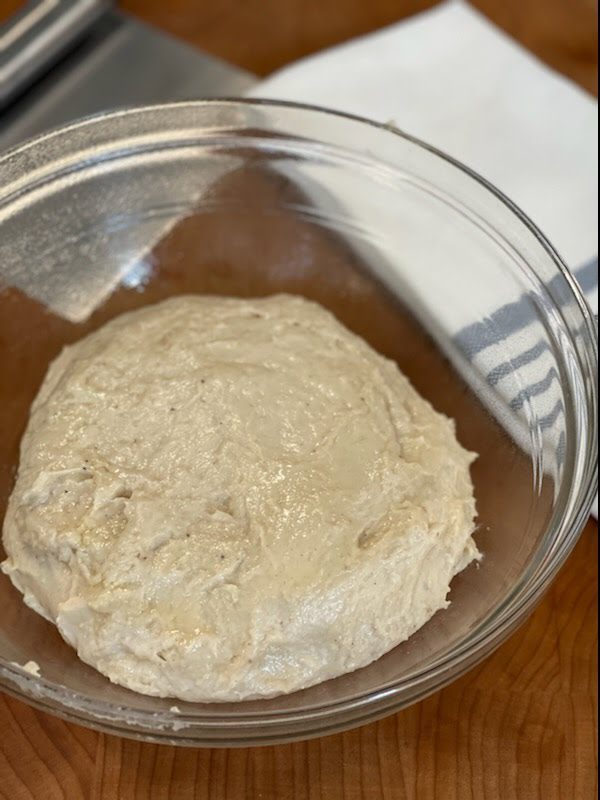 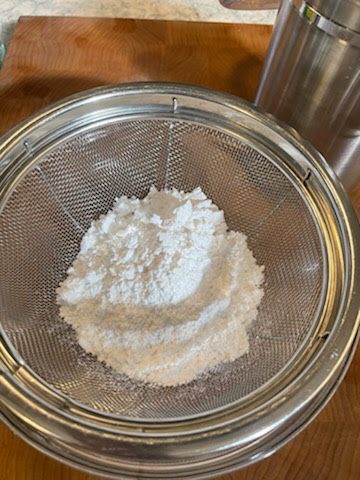