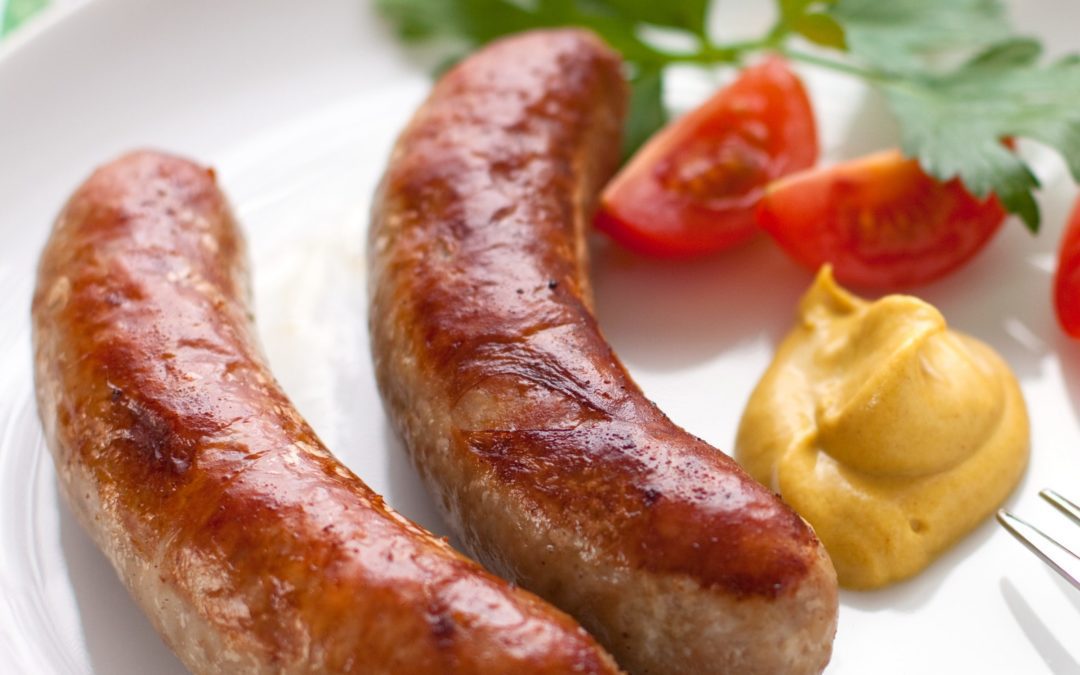 I know what you’re thinking. What does bratwurst have to do with Cinco de Mayo? Well, mi amigos, once you experience the Mexican treatment this German dish gets, you’ll see why it popped into my head as the perfect cookout meal. In honor of Taco Tuesday, I thought I’d shake things up with a recipe that lets me do two things: 1) Use up the veggies in my crisper and 2) debut a recipe that is not exactly Mexican in nature, but a celebration of different world cuisines in one dish. Enjoying a German bratwurst, presented as a colorful Mexican taco, is a very CANVAS & CUISINE-Y Thing to do! I’m talking about my work in progress, a cookbook that my good friend, Sue Fazio inspired with her beautiful oil paintings of food markets around the world.

Our collaborative cookbook features many of Sue’s gorgeous renderings of the ingredients in this “taco” dish – like Napa cabbage, red bell peppers and other scrumptious produce splattered across canvases, depicting yumminess from Spain to Viet Nam. I hope you’ll join my Facebook group, Scrumptious Possibilities to learn more! Just comment here or in my social media feed, and I’ll send you an invite.

Keep in mind: if Mom loves a good brat, you might wanna save this grill marked dinner for Mother’s Day weekend. It’s fun to enjoy poolside!

Heat an outdoor grill (or grill pan) to medium high heat. Brush both sides of the peppers, onion and cabbage with 2 tablespoons olive oil. Season with salt and pepper. Grill the veggies until just beginning to char on the edges and soften in the center, about 3 to 5 minutes. Remove the veggies to a parchment lined baking sheet. Do not overcook. You don’t want mushy veggies on your dog! Drizzle the vinegar over the warm cabbage. This will simulate sauerkraut in the taco.

Cut the brats in half lengthwise and brush both sides with the remaining olive oil. Grill until the brats just begin to char, about 3 to 5 minutes. Lay the tortillas on the grill to warm, turning after just a couple of seconds.

Assemble the tacos by placing the tortilla onto a plate. Slice the onions and peppers into strips. Slice the cabbage into thin wedges. Lay one piece of brat onto the taco. Top with slices of vegetables. Sprinkle cilantro over the top and drizzle with a bit of lime juice. Squeeze a bit of mustard over the top and serve!