Ramp up the Holiday Cheer with this Christmas Punch My favorite movie of all time is Christmas Vacation – it stars a hapless Chevy Chase as Clark W. Griswold. He drains the Midwest’s entire power grid when he plugs in his holiday lights. When he toasts to his house full of guests, it’s from a moose cup filled with egg nog.

Maybe I’m not the only one who thinks Christmas kitsch is so much fun. In the spirit of that movie, comes the Miracle Pop-Up Bar – with over-the-top X-mas decorations and menus printed off to look like lists to Santa.

It got my mind whirring for a party of my own. The environment of the one I dropped in on had an office party feel to it – it made me nostalgic for my favorite gaudy sweater.

Florida’s got a handful of Miracle bars, all serving holiday craft cocktails that figure it must be five o’clock somewhere in the North Pole.

Call me old-fashioned…that was a joke!…I’ve started noticing that my favorite restaurants pride themselves on creating drinks with culinary value. They embellish on classics like the Negroni, Gimlet and Old-Fashioned with super fresh ingredients, and a whole heck of a lot of technique. Watch the bartender work on your drink, and you’ll see it’s quite an enterprise. They’re finishing off orders with crème Brule torches, and ringing glass tops with sugar and spice and everything nice.

The craft cocktail menu at the Miracle bar closest to me in Palm Beach, Death and Glory, had cinnamon bourbon for the naughty kids. Rum, peppermint and chocolate went to the good little boys and girls.

The main menu was a blast, too! For the Home Alone fans, there was a jerk chicken dish called LOOK WHAT YOU DID YOU LITTLE JERK, entrée salads that harken back to Seinfeld, A FESTIVUS FOR THE REST OF US and, naturally, many a Christmas Vacation reference. Save the neck for me, Clark!

But the craft cocktails were the reason for the season!

What I kept noticing were the hints of cranberry, rosemary, orange and wormwood bitters, butterscotch, absinthe mist and coconut rums – it was all beginning to taste a lot like Christmas. So many of the drinks were almost too pretty to consume, so I came up with a holiday punch idea for my next party: a coconut margarita punch that had me saying Mele Kalikimaka!

So without further ado, here’s the Hawaiian way, to say Merry Christmas to you!

Juice of a lime, about ½ cup

Pour contents into a punch bowl, and garnish with sprigs of rosemary. Cranberries don’t float at the surface all that well, so for a beautiful colorful contrast, I suggest red cocktail napkins with this drink.

To prepare glasses, dip the rims in sugar and drop a few cranberries at the bottom. Accent each glass with a fresh lime wedge.

EXTREME PARTY PLANNER NOTE: Repeat recipe if it’s a large punch bowl that holds more than one yield from blender.

And, as they say at the Miracle Bar, Yippee Ki Yay! 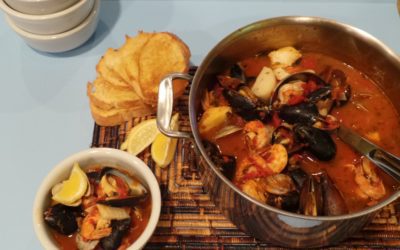 An Italian Tradition this Xmas Eve