In the Canvas & Cuisine cookbook, “apples” and “squash” appear over 80 times in the manuscript! During the fall season, we want them more than ever – that’s why I was so happy to dust off a double whammy of an autumn recipe: Apple, Sausage & Cheddar Stuffed Acorn Squash. In this version, I took a few calorie saving shortcuts.

I substituted the Italian sausage with turkey bacon, and served it sans nuts and cheese. For the fall-ish flavor bouquet, I sautéed Granny Smith Apples and bacon in a shallow bath of butter and pure cranberry juice.  There was enough left over in the pan to drizzle savory cranberry sauce over the finished product, making the baked squash extra yummy! The thing with a gutted gourd, is that it’s a blank canvas to stuff with virtually anything you see fit.

But allow me to digress…The stuffed squash comes with quite the story, as so many of my recipes do.

I was on a trip with my artist friend, Sue, Canvas & Cuisine’s co-author. We visited Blarney Castle in Ireland, and…well…I wasn’t feeling quite lucky enough to brave its narrow (I mean EXTREMELY narrow), four-story, windowless and very claustrophobic staircase.

I barely survived my one and only panic attack. I hadn’t even known I was claustrophobic until I met Blarney Castle. When we finally burst out of the tower and onto the top, Sue and I found ourselves in-line to kiss the famous stone. Tradition has it that in order to kiss the stone to receive the gift of eloquence, one has to bend over backwards lowering your head from the parapet walk over an opening in the tower that leads all the way down to the ground below.

There are two very, very young, very, very scrawny teens, on either side of the hole in the floor to make sure you don’t fall, but they were not convincing enough for me! I ended up sprinting past Sue and that stone, down the castle’s back stairs, and found my way to the closest pub. I took refuge in a pint and comfort in a dish called Cheshire Pie, which combines chunky pork and sautéed apples in a flaky crust.

The Canvas & Cuisine recipe for stuffed acorn squash was born shortly thereafter. The recipe posted below is a modified version. In both recipes, the flavors are sweet, tart and rich. It’s super for a mid-week meal and awesome for a brunch gathering before your next sight-seeing trip. Just make sure that you check out the sight to avoid unnecessary fright! Preheat the oven to 400°. Drizzle the cut side of the squash with 1 tablespoon olive oil and sprinkle with cinnamon. Place the squash, cut-side-down into a baking pan. Bake until the squash is fork tender, about 20 minutes.

Heat the butter over medium heat. Add the brown sugar and cranberry juice. Add the apples and bacon, and cook until fruit is soft, and bacon brown and crumbly, about 8 minutes. Season with 1 more teaspoon cinnamon spice and some of the salt and pepper.

Pull the baking dish from the oven. Turn the squash so they are cut side up. Stuff the squash with the apple/bacon filling. Use any remaining cranberry/bacon syrup to drizzle over the top.

For the Decadent Cook:

Add cheddar cheese if desired, by placing the dish back into the oven, and cooking until the cheese is melted, about 10 minutes more. Garnish the stuffed squash with a dollop of sour cream. 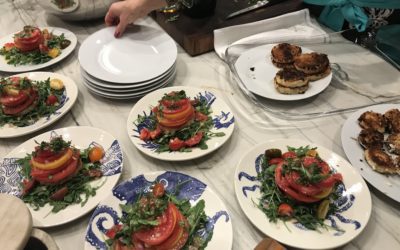 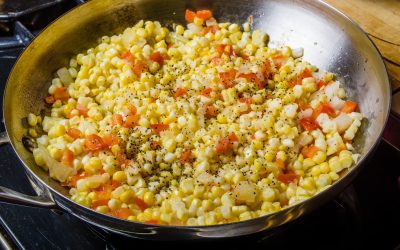