A Tale of Two Schnitzels: How to Freeze Food For Budget Meals

Bulk cooking equals budget meals without sacrificing good taste! Learn how to freeze food and make the most of your dinner. Click to skip to the recipe 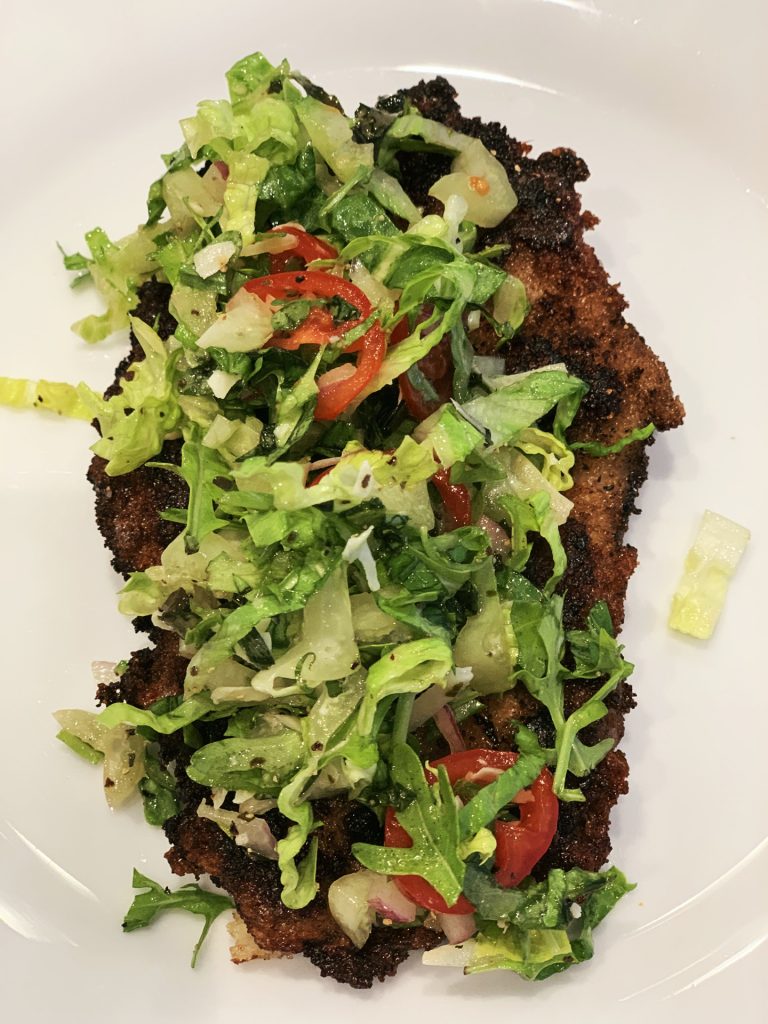 For years and years, I have poo-pooed the notion that it is difficult to cook for two.

My solution has always been to cook more and people will come and eat it.

This was my mantra and it came true because I had friends and kids and kid’s friends and friends of friends that would drop by.  I had food prepared and ready to go.

Then the world changed. My drop-by visitors have dried up! The leftovers are piling up and although I love leftovers for lunch the next day, hubby does not agree!

Try as I might, he won’t give up that liverwurst sandwich for a previously baked lemon chicken thigh.

All of a sudden, I got it! Couple this with our new normal trend of “take-out dining” and I began to ponder a new truth.

While I support local restaurants (I take-out) but I must admit, it’s not like the real thing. That French fry or crisply fried chicken skin grows limp as it steams in the bag waiting for the drive home. Rare fish goes to well done if it is left to sit longer than normal. Veggies get soggy, salads warm to room temperature.

This is not the restaurant’s fault. Painstakingly plated chef-prepared food is not designed to be served 20 to 30 minutes after it has been cooked.

How to Freeze Food For Budget Meals

In order to have food that is prepared and served as it is intended to be eaten, you have to take a look at your freezer. I wondered why frozen food that is heated in the oven or microwave tastes better than take-home food from the restaurant.

Something about the process of preparing the food, freezing it, and then finishing in the oven is better than delivery and reheating.

So, I thought I would experiment and ya know what? It worked!!

Pork loin usually comes two to a package. A smart menu planner would open the package and freeze the loins separately when cooking for two. That’s unfortunately not in my (cook-more-than-you-need) wheelhouse. So, when I defrosted my package of pork loins a few days ago, the opportunity to flash freeze presented itself.

I thought about schnitzel, which are breaded cutlets sometimes served with mashed potatoes and white gravy. I took the schnitzel idea and made two recipes.

The recipes follow, but here’s the experiment in a nutshell:

I cut each loin into 3-inch medallions. I placed each medallion in between two pieces of plastic wrap. I used my trusty meat mallet to flatten the medallions into thin cutlets. These I breaded. I froze half of the breaded cutlets for later use and used those that were left to create Pork Parmesan. Delish!

The best part was that when I defrosted the remaining cutlets to make Pork Milanese it worked like a dream! Perfection and a second delish!

Now, I’m not saying refrain from taking out food from your favorite spot, because it is our duty to support our local restaurants. But what I am saying is that on those evenings when you choose to cook, prepare more than you might need.

Pre-freeze instead of post-freeze and you will have a jump start on another meal that will taste right-out-of-the-oven perfect! 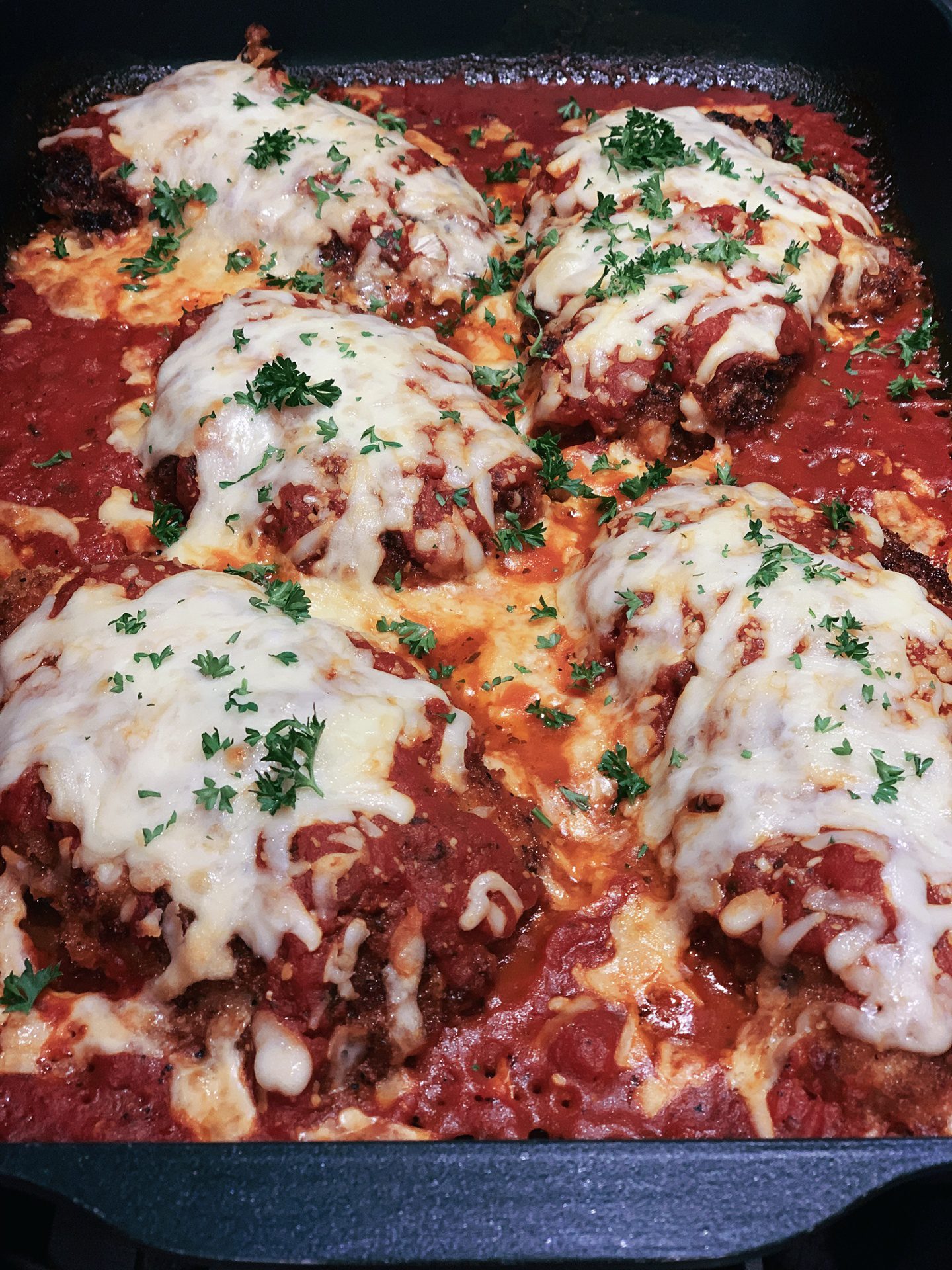 A tad more sturdy than eggplant parm, this dish comes together quickly and only requires a side of spaghetti tossed in olive oil and a green salad.

Juice of 1 lemon, about 2 tablespoons 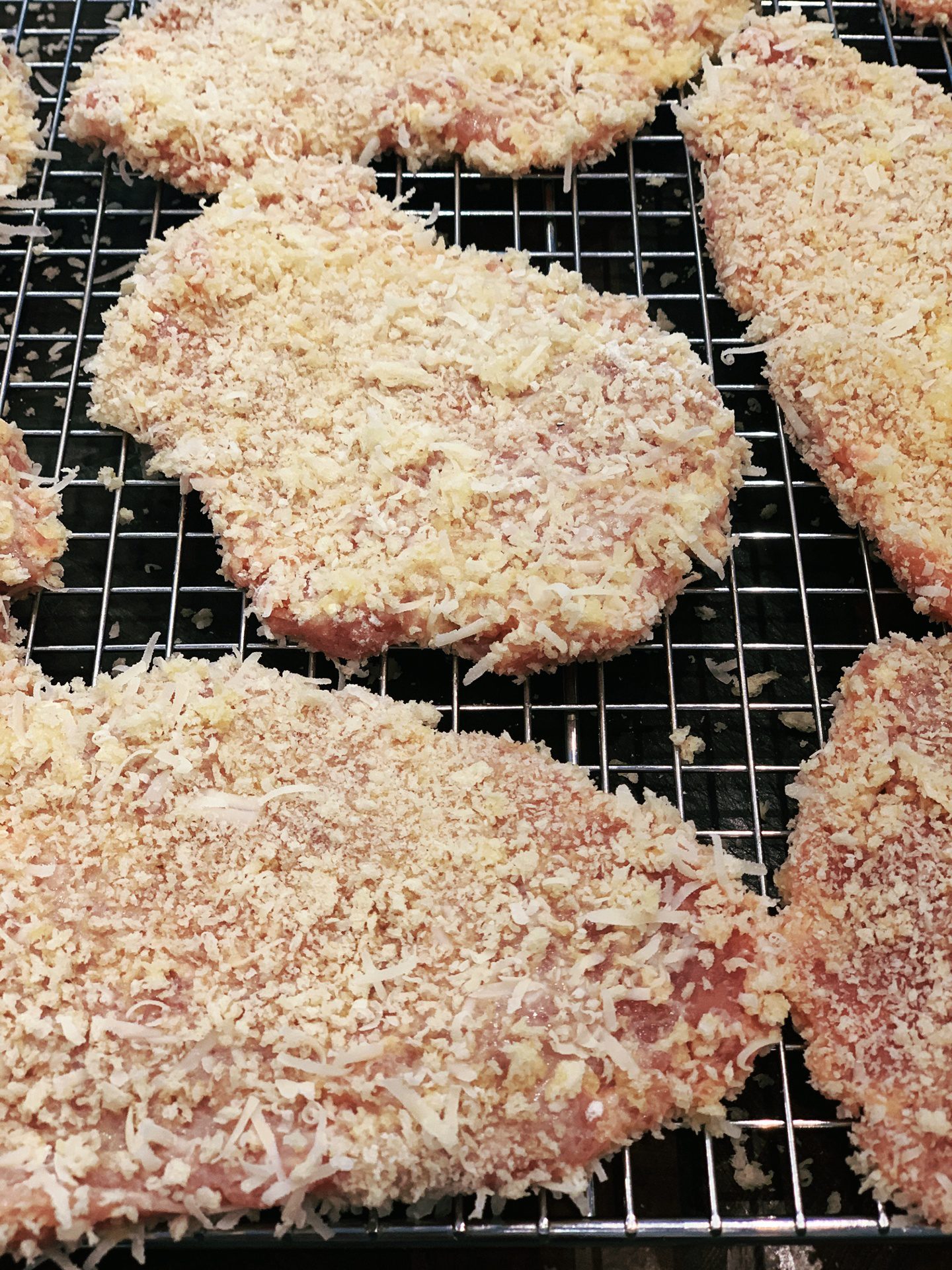 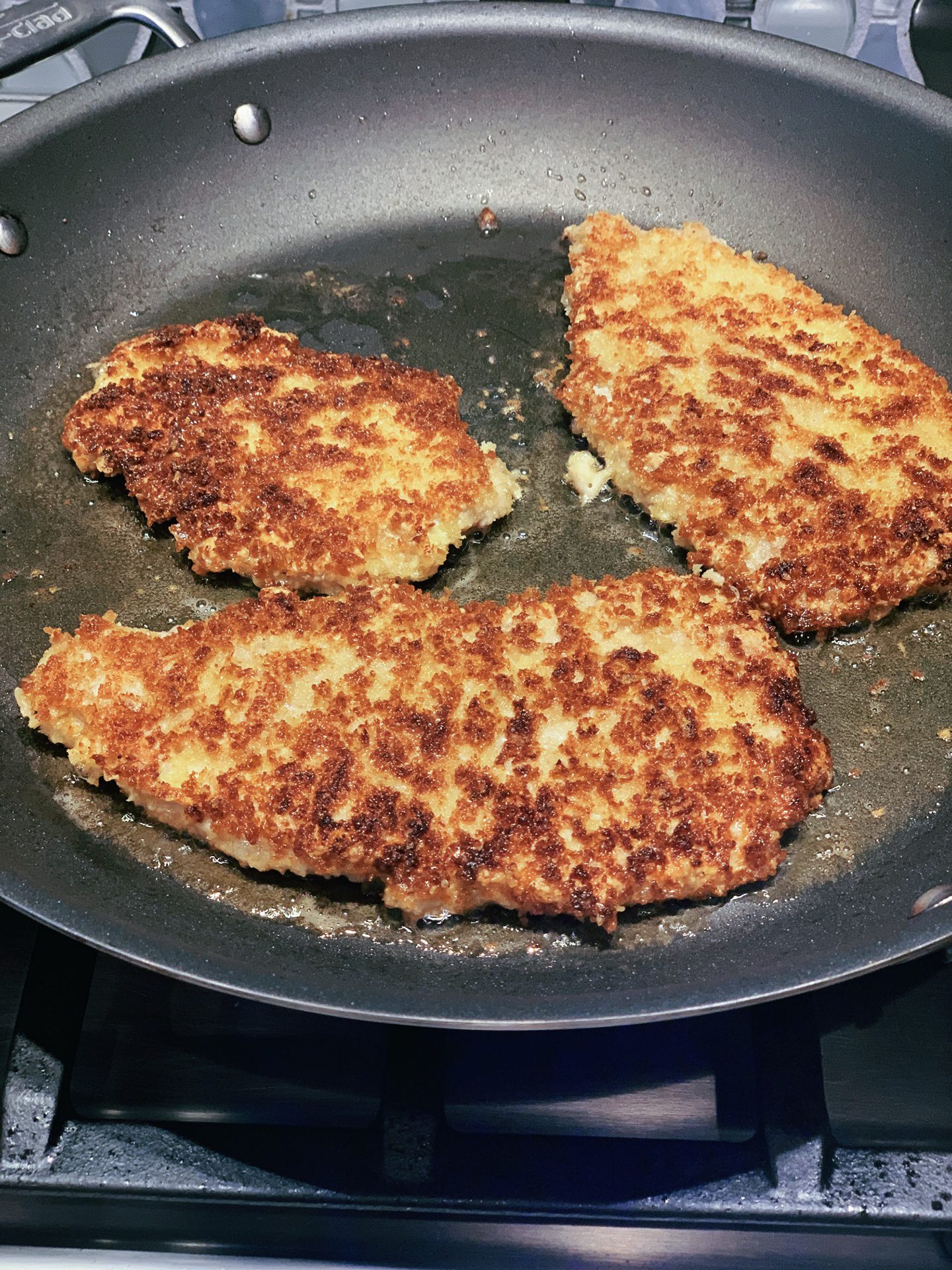 Pour the tomatoes into a saucepan over medium heat. Stir in the lemon juice, sugar, and oregano. Season with salt and pepper. Reduce the heat to low and simmer the sauce while you prepare the cutlets.

Slice the tenderloin into 3-inch medallions. Place each medallion in between two pieces of plastic wrap. Use a mallet to flatten the medallions into thin cutlets. Season with salt and pepper. Place the flour into a shallow dish. Place the egg into a separate dish and mix with 2 tablespoons water. Place the breadcrumbs into a third dish. Take each cutlet and dip it first into the flour (shaking off the excess), then into the egg wash, and finally into the panko breadcrumbs. Place each cutlet onto a rack.

Pour the sauce over the cutlets. Top with both cheeses. Bake until the cheese melts and the cutlets are cooked through, about 20 minutes. Garnish with fresh parsley.

A riff on veal or chicken Milanese, this dish comes together quickly if you’ve managed to previously prepare the cutlets and then just thaw them. For the salad, I used Romaine, red leaf, and arugula lettuces with a chiffon of basil and a bit of dill in the mix. Anything you have in your vegetable drawer will work well here. The secret is to slice the salad ingredients very thinly, so they fit nicely on the cutlet.

Juice of lemon, about 2 tablespoons 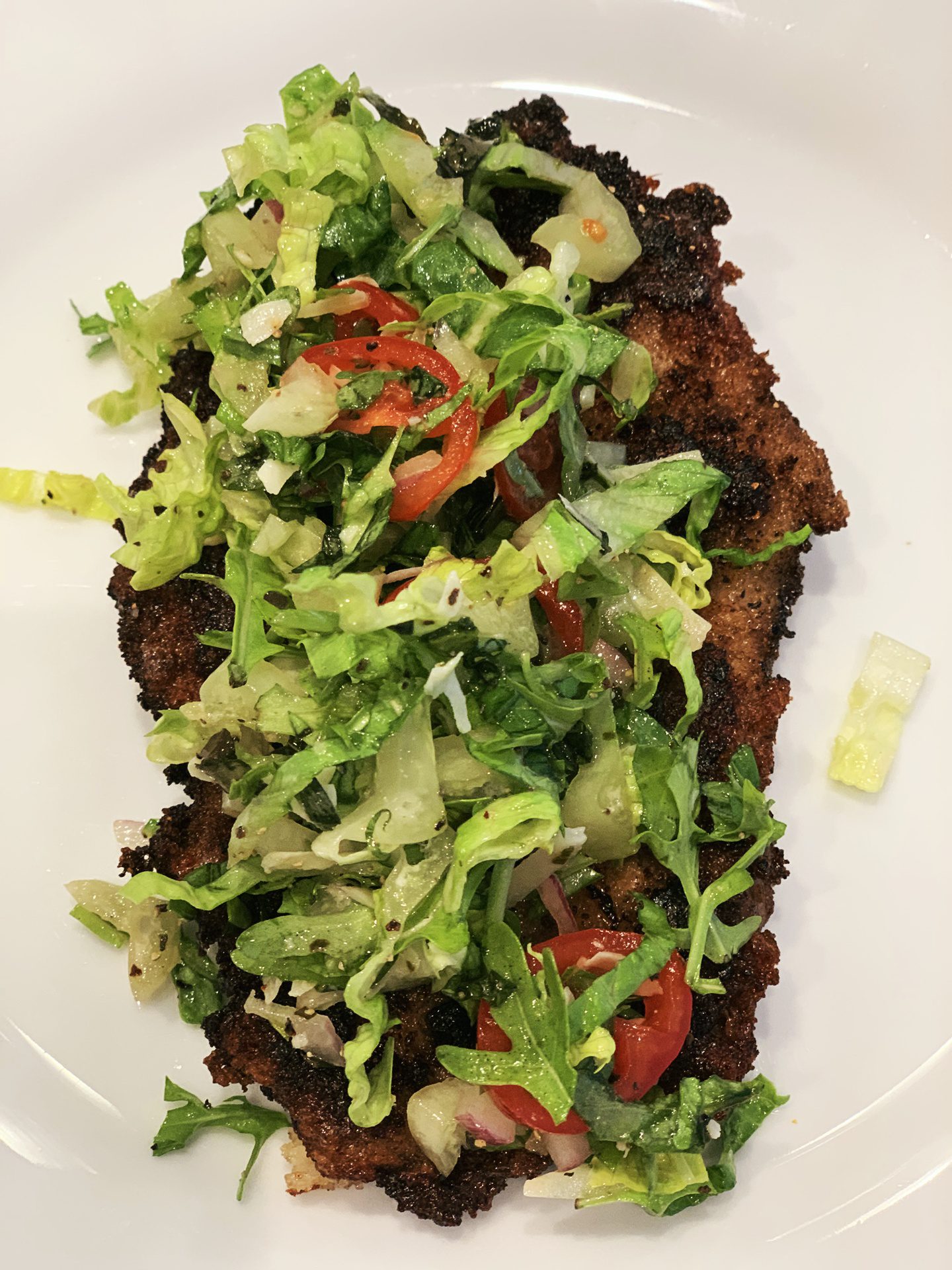 Slice the tenderloin into 3-inch medallions. Place each medallion in between two pieces of plastic wrap. Use a mallet to flatten the medallions into thin cutlets. Season with salt and pepper. Place the flour into a shallow dish. Place the egg into a separate dish and mix with 2 tablespoons water. Place the breadcrumbs into a third dish. Take each cutlet and dip it first into the flour (shaking off the excess), then into the egg wash and finally into the panko breadcrumbs. Place each cutlet onto a rack. 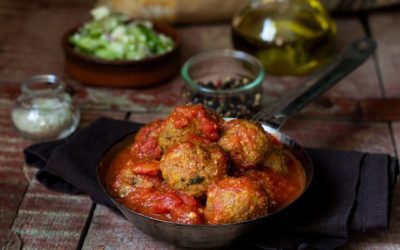 Shhh! I snuck a few veggies in these fab meatballs… 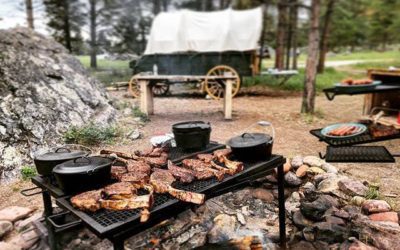